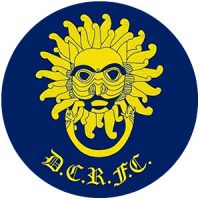 Durham City R.F.C., the second oldest club in the County, was founded in 1872, one year after The Rugby Union.

The club moved to their present ground “Hollow Drift” in 1885, developing it to provide some of the best facilities in the North. Two pitches and a training area are fully floodlit. Besides a Memorial Grandstand commemorating the club’s War Dead, there is excellent viewing from a bank side developed from a defunct railway embankment. The third clubhouse overlooking the pitch provides superb changing accommodation and two lounges with balconies overlooking beautiful “Hollow Drift”.

The navy and gold club colours remain unchanged and Durham Cathedral’s Sanctuary Knocker has been adopted as the club crest.

Prior to leagues, success was measured by The County Cup Competition begun in 1880-81. City have won The Cup nineteen times, the first in 1885. In 1953 City created a record by winning all five of the County trophies, repeating the feat (except The Sunderland Cup) in 1958. The club won The Senior Cup in six consecutive years between 1962-1967 and were runners up six times before winning again in 1988, giving us entry into the Pilkington Cup. We beat Sandal and Sale before going out to Wasps.

When leagues began City gained National Merit Qualifying Status due to its very strong fixture list. In 1988, whilst in the Northern Merit Table, we unsuccessfully played Rugby in a promotion decider. Following various league name changes, we played in National League 4 (later 5), until 1993 when we began to suffer gradual relegation, once as a result of depleting our team to provide six players for the County side which reached the final of the County Championship. The side was further depleted when professionalism began. Durham City, who has retained their amateur status, now play in Durham and Northumberland Div 1.

The greatest recent change has been the founding of Women’s Rugby in 1996 and due to great commitment; they won promotion in two consecutive years.

Many players have gained representative honours. Prior to 1948, seven players played for England, three for Scotland and one for Ireland. Since 1948, we have had three British Lions (one Rugby League), five full England players and one Scottish, plus many capped at lower international levels. Three English Captains have graced City’s strip – Michael Weston, Will Carling and Phil de Glanville.

Players most influential in the clubs history are: – George Summerscales (club captain for 12 consecutive years, 51 County Caps and played for England); Stan Hodgson (44 year playing career began 1945, captained the club, played 88 County Games, 11 England caps, toured with the British Lions and played for the Barbarians); Michael Weston, our most influential player (club captain, and with Stan Hodgson, transformed the County side to become Northern Champions 6 times, runners up and co-holders of the County Championship, captain of the County side from 1961-1968, capped 29 times for England, captained England, twice toured with the British Lions and played for the Barbarians); Jon Bland whose first City game was in 1978 (England Colt, many County caps, captained the County, leading them to win the County Championship against Cornwall and captained the club 7 times).

In addition to four regular senior sides and a Women’s side, the club runs a popular Veterans XV and has thriving mini, junior and colt sections providing games and coaching to every age group from under 8’s to over 50’s.